The solar PV status report for Lebanon was published for the first time in 2016, thanks to the United Nations Development Program – Decentralized Renewable Energy Generation Project (UNDP – DREG), analysing the implemented PV projects data in Lebanon by the end of 2015. The report then became a yearly publication reporting on the market’s growth for the previous year, and following the development of its first, second, and third edition by the UNDP-DREG, the Lebanese Center for Energy Conservation (LCEC) prepared and published the fourth edition and now the fifth one: The 2019 solar PV status report for Lebanon.

The exceptional circumstances of 2020, mainly due to the global covid-19 outbreak, the local economic crisis, and the 4thof August explosion in Beirut, delayed the publishing of this report till 2021.

The objective of this report is to present comprehensive data relevant to the Lebanese PV market, highlighting the environmental impact of fossil fuels reduction, and the financial impact of PV systems integration, the most common type of renewable energy systems in Lebanon, which enables decision-makers and stakeholders to align their efforts to continue supporting the market and sustaining its healthy growth.

The conducted study covers mainly privately owned PV systems installed all over Lebanon, including the ones implemented through the NEEREA national financing mechanism, analyzing their contribution in the total electricity generation, their annual and cumulative growth in terms of projects count, capacity, energy production, cost, monetary and emissions savings, by collecting the necessary data from participating PV companies, allowing the report to interpret the market’s distribution in terms of governorates, districts, systems types, and sectors.

The PV field is evolving continuously in Lebanon, and as quantified in the report, the capacity growth from 2010 to 2019 average rate is 89% per year, reaching a total of 78.65 MWp installed capacity, with a total investments value of 125.83 MUSD, and contributing in 0.73% of the total annual electricity generated by Electrecité du Liban (EDL). 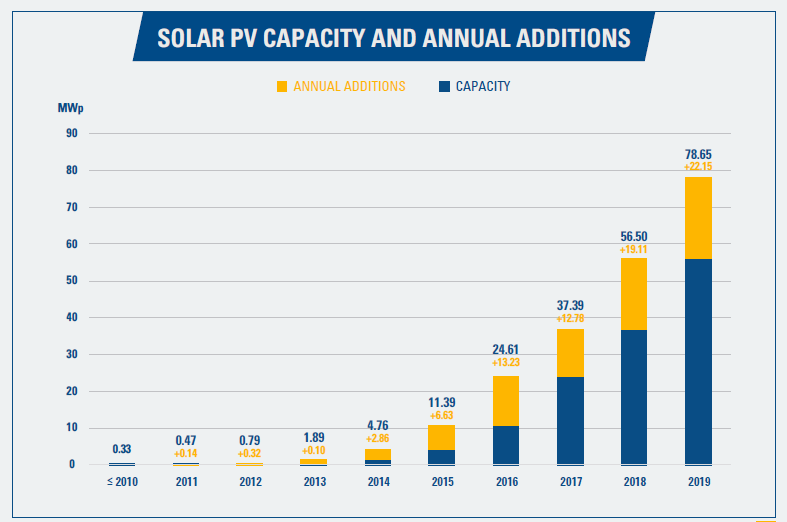